In the Republic of Turkey, the sale of real estate is becoming a branch of the economy, which every year brings more and more income to the state budget. And 2021 is no exception. Despite the fact that housing inventories have decreased due to the epidemic of the coronavirus, and the value of real estate has increased, last year's sales can be considered quite successful. sales totals Over 3 million properties were sold in Turkey in 2021. Of these, sales of residential real estate amounted to 1.491.856 objects. The rest is land plots and commercial facilities. Compared to 2020, the number of transactions for the purchase and sale of real estate decreased by only 0.5%, that is, it remained almost at the same level. The highest proportion of real estate sales came from Istanbul. More than 276 thousand objects or 18.5% of the total number of housing sales in Turkey were sold there. Ankara and Izmir are next in terms of the number of sales. But less than all housing last year in Turkey was sold in the provinces of Hakkari (267 objects) and Ardahan (377 objects). As for the housing itself, more than 60% of sales were in the secondary real estate market. Mortgage last year was in demand very unevenly. In the summer, when an unprecedented campaign to lower interest rates was announced, people bought a record number of homes on the terms of mortgage lending. Then, when rates rose again, most buyers preferred to repurchase property immediately for the full amount or on an interest-free installment plan. For example, by the end of the year, home sales without mortgages grew four times compared to mortgages. real estate sales to foreigners If, in general, real estate sales in Turkey in 2021 remained approximately at the same level as in 2020, then foreigners set records for purchases almost every month last year. Citizens of other countries were very active, buying apartments and villas in large numbers. In total, according to the results of the year, foreigners bought 58,576 properties in Turkey. And this is 43.5% more than in 2020. In general, the share of home sales to foreigners has reached almost 4% of the total property sales in Turkey. Most housing was bought by foreigners in Istanbul. This city accounted for almost half (45%) of all real estate sales to foreigners. Antalya and Ankara are next in terms of the number of homes sold. It is worth noting that Istanbul has been the leader in terms of the number of purchases for five years in a row. By the way, residents of Arab and European countries often buy real estate in Istanbul. But citizens of the CIS usually choose coastal areas, in particular, their favorite cities are Antalya and Alanya. As for the foreign buyers themselves, the top three have not changed for the second year. Most housing in Turkey is bought by citizens of Iraq, Iran and Russia. Also, the top ten purchasers include citizens of Germany, Saudi Arabia, Great Britain, Kuwait, Afghanistan, Azerbaijan and Jordan. Last year, for the first time in the history of real estate sales in Turkey to foreigners, the Chinese became very active. They especially fell in love with Istanbul, buying up 100 apartments at a time there. One of the goals of this "apartment wholesale" is the possibility of obtaining Turkish citizenship, which is given under a simplified scheme when buying a home in the amount of $250,000 or more. Also, interest in buying real estate in Turkey has increased several times among US citizens, who also bought quite a lot of housing in Turkey last year. In summary, it can be noted that 2021 has become one of the best years for real estate sales in Turkey to foreigners. Despite the pandemic, the instability of the global economy and many other factors, citizens of other countries consider buying a home in Turkey a profitable investment and invest a lot of money in it. prices Perhaps one of the main features of the past year for the real estate sector in Turkey was a serious rise in prices. Due to the rise in price of building materials and the work itself, due to a decrease in housing stocks, the cost of real estate in Turkey grew every month. As a result, housing prices will increase by more than 50% in a year! And Turkey last year has become a country where real estate has risen in price more than in any other country in the world. This fact has become a serious incentive for property buyers, especially for foreigners. Housing prices will continue to rise in 2022. This means that buying a home is profitable: you can always sell it for more than it was bought, or rent it out very profitably. Overall, 2021 has been a good year for those looking to buy or sell property in Turkey. The sector has almost fully recovered from the coronavirus epidemic, developers have actively taken up new projects, and real estate companies are working on an increasingly tight schedule. In the new 2022, new records are predicted for real estate sales in Turkey. Join those who have already become the happy owner of their house by the sea, come to our wonderful country, we will definitely help you with the choice and purchase of real estate! We will sum up in January 2023. 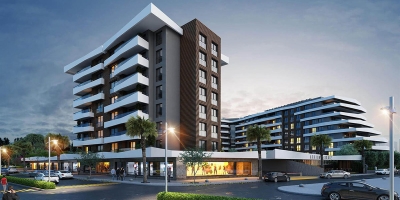 In the Republic of Turkey, the sale of real estate is becoming a branch of the economy, which every year brings more and more income to the state budget. And 20